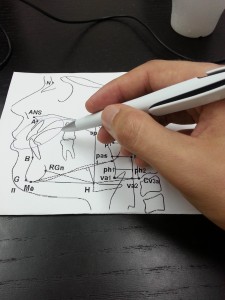 The Sassouni Analysis was named after Viken Sassouni in 1955, after several authors had spent time trying to understand the importance of the vertical dimension and its effect on the anteroposterior facial dimensions. Sassouni was finally able to strategically enhance the method in orthodontic treatment planning.

The Sassouni Analysis was the first cephalometric analysis that could categorize both vertical and horizontal relationships, as well as the interaction between the vertical and horizontal proportions of one’s face. In order to study the structural configuration of the skull, which helps you view growth analysis, diagnosis, and treatment, Sassouni constructed several planes, arcs, and axes on the profile cephalostatic roentgenogram.

Sassouni also played a large contributing role toward the idea that if a series of horizontal planes have been drawn from the SN line at the top, to the mandibular plane below, they will project toward a common meeting point in most well-proportioned faces.

When inspecting the horizontal planes for the patient, it’s clear that the maxilla has been rotated downward posteriorly and the mandible rotated downward anteriorly. Since the jaw rotates there’s an added tendency toward an open bite, meaning the skeletal pattern is revealed and often referred to as the ‘skeletal open bite’.

In a normal, well-proportioned face, the Sassouni analysis has four planes meet at point O. The first plane is tangent to sella and parallel with the anterior cranial (Os). Then we have the Palatal plane (On), the Occlusal plane (Op), and the mandibular plane (Og). These were the measurements that Sassouni found to be well proportioned when the axis of these four planes, prolonged posteriorly, meet at a common intersection as we refer to as O. This point O is posterior to the occipital contour O.

The relationship of the four planes coming together to common point O allows each of the classification for the four different facial types. Type I occurs when the anterior cranial base plane doesn’t pass through O. Type II occurs when the palatal plane doesn’t pass through O, and so on and so forth for Type III, the occlusal plane, and Type IV the mandibular base plane.

By using O as the center, Sassouni was able to construct two arcs. First is the anterior arc, the arc of a circle, between anterior cranial base and the mandibular plane, O is the center and O-ANS is the radius. The posterior arc on the other hand, lies between the anterior cranial base and mandibular base plane, with O as the center and Osp as the radius. Sp being the most posterior point on the rear margin of sella turcica.

The Sassouni approach has been popularized as an archial analysis. His observations are based off research, he classified all of the malocclusions into 9 types of craniofacial patterns. These consist of:

This means, essentially the neutral or skeletal open bite (vertical) and deep bite (horizontal) can exist in any and all three types of anteroposterior dysplasia of jaws.

According to Sassouni, the well-proportioned face is expected to possess normal occlusion. Contrary to his conclusions, of 50 people with normal occlusion sampled, only 16 were found to have a well-proportioned face. While the norm concept may not be accepted as an absolute for every individual, Sassouni is a big advocate for the measurement of proportionality in the individual as a basis of growth, diagnosis, and treatment planning.

Today we have tools such as CephXto our advantage which makes it easier for us to diagnose and plan treatment based upon more accurate cephalometric analyses and tracing.

X
This website uses cookies.Learn more
Disclaimer: Cephx AI based cephalometric analysis SERVICE is not FDA cleared for marketing in the US.
I understand and agree